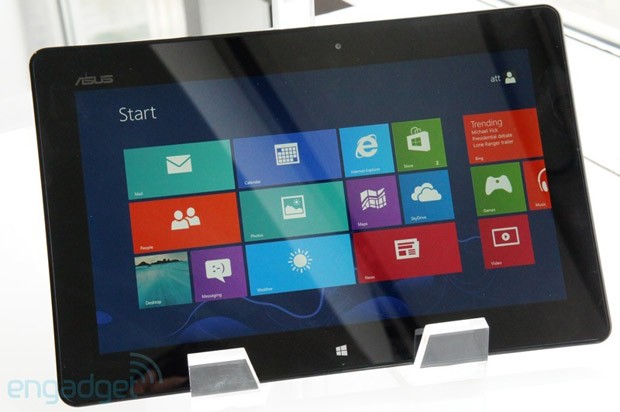 The ASUS VivoTab RT is heading to AT&T exclusively this winter with 4G LTE — that much we already knew. But how does it feel? Well, it feels like a super thin (0.33-inches) and light (1.1 lb.) Windows 8 RT tablet. The Tegra 3 quad-core processor packs more than enough power into the 10.1-inch, multitouch Super IPS screen to make swapping between apps and other such affairs a smooth snap, and 2GB of internal RAM certainly doesn’t hurt in the speed department either. That 10.1-inch screen comes with ASUS’ “TruVid” technology, which intends to make your viewing experiences all the more magical — the screen looked plenty nice to us, as did media displayed on it, but perhaps not the “brilliant viewing experience” that ASUS is touting. There’s still no price for the device or its non-RT cousin (not to mention those AT&T data plans), but we expect to hear more in the near future — winter’s only so long, right?