NASA astronomers and other scientists around the world are always studying the heavens. Astronomers are able to determine when celestial objects, such as black holes, are having periods of increased activity by monitoring them over time. Astronomers using the NASA Swift satellite detected a significant increase in high-energy x-rays being outputted from near the center of our Milky Way galaxy. 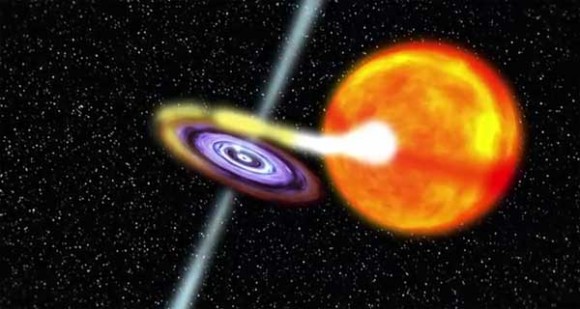 According to the scientists, the x-ray outburst was produced by a rare x-ray nova. The nova’s source was a previously unknown stellar-mass black hole according to the astronomers. The scientists describe an x-ray nova as a short-lived x-ray source that suddenly appears, reaching a peak over a few days, and then fades out over a period of several months.

The astronomers report that the Swift’s Burst Alert Telescope was triggered twice by the increased x-ray activity on September 16 and September 17. The x-ray source was dubbed Swift J1645-26 and is located a few degrees off center of our galaxy towards Sagittarius. The precise distance of the object from the Earth is unknown.

The astronomers believe that the object is 20,000 to 30,000 light years away from the earth. Observatories on the ground have been able to detect infrared and radio emissions from the object, but thick clouds of dust have prevented any imaging of the object in visible light.