Apple released a Lightning adapter that allows 30-pin cables to be lugged into Lightning ports. One man was brave enough to open it up to see what was inside. 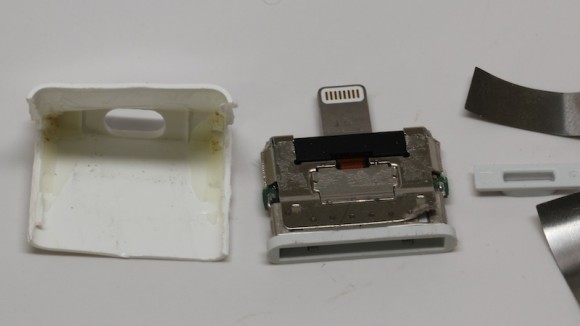 Peter, from Double Helix Cables, decided to earmark $30 towards an Apple dock connector that he would use to essentially destroy. However, he took pictures along the way and described the experience. First off, just opening up the connector was more difficult than expected, as a Dremel is about the only thing that’s able to pry it open.

One of the first things that Peter notices is that the connector is “beautifully manufactured like a cruel puzzle.” The lightning plug itself is steel reinforced, with a rubber dampening piece that wraps around it. Then, there’s a thin coating of epoxy that pretty much covers all of the circuitry, which makes it nearly impossible to tinker with. To top it all off, there’s a steel cage that encloses it all.

Peter mentions that in order to hack in a dock audio output cable to the Lightning connector, it “would require a Ph.D. in electrical engineering and specialized tools.” On top of that, the steel cage basically requires a tungsten carbide cutting blade in order to take everything apart in once piece. Plus, you have to chisel away at the epoxy that’s covering the chip itself. In the end, Peter said that it took him most of afternoon to take the adapter apart.