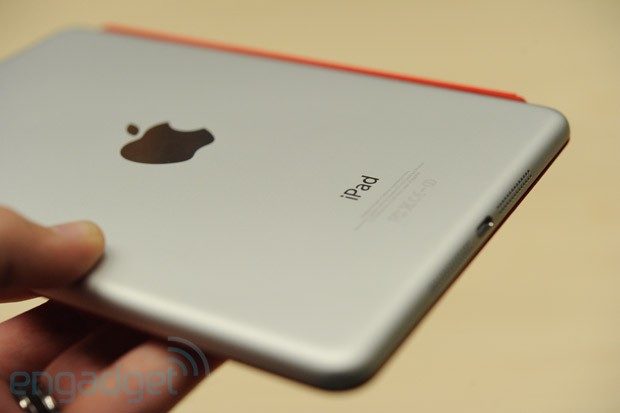 At long last, it’s the iPad mini. Unveiled today at a special event in San Jose, the slightly more portable iPad most certainly looks like its 9.7-inch elder, but it’s equipped with the same Lightning port that was ushered in on the iPhone 5 and is entirely more eager to slip inside some of the world’s largest cargo shorts. If you’ll recall, rumors of this thing actually hit a fever pitch back in 2010, with the stateside Apple v. Samsung patent trial revealing that SVP Eddy Cue was longing for a more book-friendly iPad in 2011. Naturally, Apple’s pushing the smaller form factor as a boon for those who adore ingesting text on digital screens, further advancing its iBook and education initiative that took center stage at its January keynote in New York City.

The device itself is precisely what you’d expect it to be: a slightly shrunken iPad, with a rear that resembles the new iPod touch. It’s aluminum-clad, finely polished and equipped with a 7.9-inch LCD (1024 x 768). The volume rocker, orientation / mute switch and bottom-mounted speakers are graciously borrowed from the conventional iPad, while the rest of the exterior maintains a pretty familiar look. No, there’s no touch sensitive bezel (à la PlayBook), wireless charging or USB 3.0 support — if you were looking for breakthrough hardware additions, you’ll be sorely disappointed.

That said, the smaller iPad is clearly aimed at classrooms and readers — two sectors where frills aren’t exactly necessary. Where it excels, predictably, is the overall fit and finish. Just as the bigger iPad, this one feels delightful in the hand. If you’ve held an iPad, you know where we’re coming from. Yes, it’s lighter and more nimble, making it feel as if Apple concocted its own version of the 7-inch tablet. And indeed, that’s precisely what has happened here. It’s still not “small,” though. While a fully outstretched adult hand can generally grasp it without help from the other, you’ll still want both for typing and using apps. It’s still too big for your average pocket, and it’s not going to save you a heck of a lot of room in your knapsack compared to the 9.7-incher.