Last month, the Swiss Federal Railway service (SBB) accused Apple of copying their iconic clock design by using it in the iOS 6 Clock application. However, a few days later, we were told that the two companies would be meeting with each other to discuss ways to remedy the issue. Today, Apple has agreed to pay the SBB for use of the clock design. 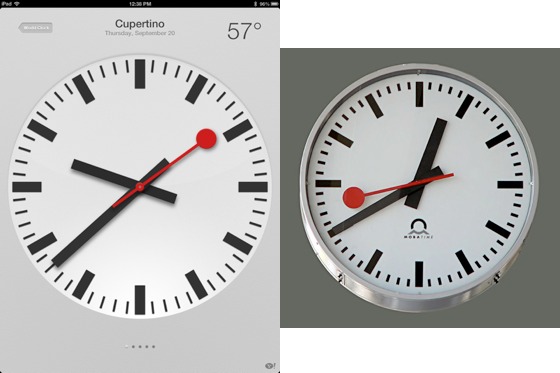 The two companies have agreed upon a fair price and signed a licensing agreement. However, neither company has disclosed how much the agreement was for, but we’ll probably hear about it soon, either through an official announcement, or from an insider analyst. But we think it probably wasn’t as much as what Samsung forked over.

The iconic Swiss clock was designed in 1944 by Hans Hilfiker, who was a SBB employee himself. The clock looks practically identical to Apple‘s version in iOS 6; it has the same black dashes with the thick hour and minute hands, and the big red dot at the end of the second hand. The design also happens to be licensed to Mondaine, a Swiss watch maker. So essentially, Apple was definitely infringing and they could’ve easily went to court and lost.

However, the two companies decided to sit down with each other and fight it out like gentlemen while coming to an agreement without whining to a judge. We can’t really blame them, though. I’m sure Apple is sick of being in court (probably not, though), and the SBB most likely didn’t want to deal with a court in the first place.

Apple and the SBB agree on licensing terms for iconic clock design is written by SlashGear.
© 2005 – 2012, SlashGear. All right reserved.