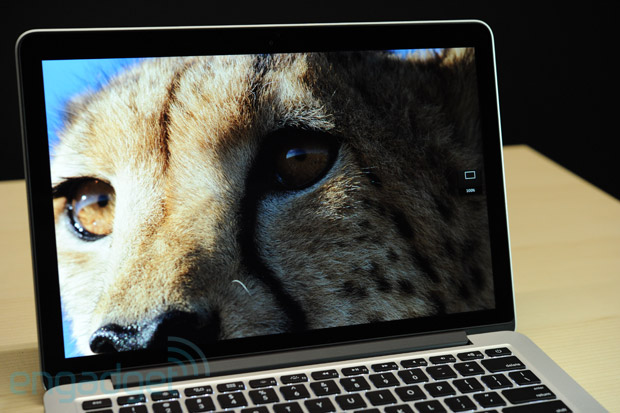 Apple just introduced its second Retina display MacBook: the 13-inch MacBook Pro, which starts at $1,699 and is shipping today. Just months after the 15-incher was gifted with a display that packs more pixels than your existing HDTV, the 13-inch sibling is receiving similar treatment. Unveiled today in San Jose alongside the iPad mini, the intensely dense 13-inch MBP is true to the rumors — there’s a 2,560 x 1,600 panel, a pair of Thunderbolt ports, a full-size HDMI socket and a MagSafe 2 power connector. Unfortunately, those yearning for a Retina-equipped MacBook Air won’t find their dreams fulfilled just yet, but you can bet that holdouts will most certainly give this guy a look.

For starters, it’s wildly thin. No, not manilla envelope thin, but thin enough to slip into most briefcases and backpacks without the consumer even noticing. Outside of that, it’s mostly a shrunken version of the 15-incher let loose over the summer. The unibody design is as tight as ever, with the fit and finish continuing to impress. In my estimation, this is Apple’s most deliberate move yet to differentiate the 13-inch MacBook Pro from the 13-inch MacBook Air. On one hand, power users longing for a highly portable laptop can rejoice; on the other, this could be seen as reason for Apple to restrict the use of Retina displays to its Pro range for the foreseeable future.

Compared to the 1,280 x 800 resolution of the non-Retina 13-inch MBP, the new display is particularly stunning. Text has never looked more crisp, and colors are stupendously vibrant. Of course, apps, websites and graphics that haven’t been optimized for Retina still look like utter rubbish, and as more Apple machines transition to these panels, the outcry is going to get even louder. But, hopefully, it’ll light a fire under developers to get with the program.