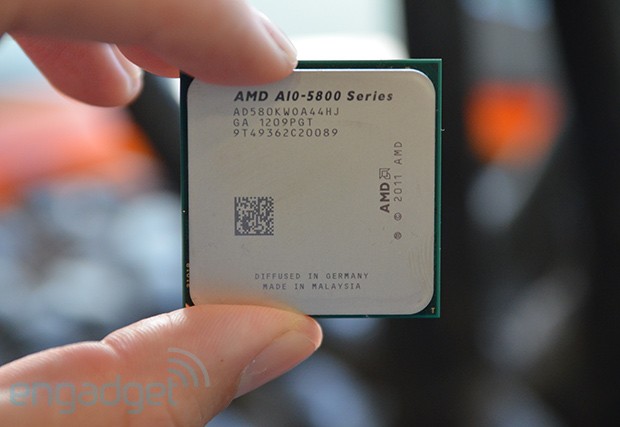 It’s never easy playing second fiddle, but AMD is trying their best to keep Intel on their toes with its latest line of Trinity desktop chips. We were introduced to the Trinity last week, but now the official reviews are in from the usual specialist sites. The consensus seems to be that it provides solid performance for the price. The Trinity A10-5800K is in the same class as the Core i5 but sells at $130 on NewEgg, which is the going rate for the Core i3-3220 (Guess those price leaks were true). Hot Hardware notes that both the A10-5800K and the A8-5600K offer improved performance and decent overclockability, stating that it offers “roughly a 10 percent kicker in CPU performance” and “15 – 17 percent increase in GPU performance.” As for power consumption, Anandtech claims the Trinity isn’t quite as good as the Core i3, but “compared to Llano, Trinity is a bit more efficient” so it looks like there’s improvement from past AMD chips. TechSpot points out the Trinity also requires a new Socket FM2 motherboard.

Like most reviews, Hot Hardware recommends the Trinity chips as a solid choice for those who want an entry-level system. However, those hungry for power are probably still going to go Intel. Legit Reviews states that the AMD Trinity will do just fine for everyday use and some light gaming, leaving the pricier Intel chips for performance-chasers. Definitely peruse the links below for more details before considering a purchase.

AMD Trinity review roundup: good bang for your entry-level buck originally appeared on Engadget on Wed, 03 Oct 2012 17:42:00 EDT. Please see our terms for use of feeds.