This month an inventor by the name of Izhar Gafni has shown off his “Alfa” bicycle made of cardboard, one he says has the potential to change transportation as we know it. This vehicle is heading to mass production in just a few months and has been demonstrated by the inventor on several occasions. After four years – or so he says – of working on negating the weak points in the structure of traditional cardboard, Gafni says he’s done it, and it’s time to ride paper around the city. 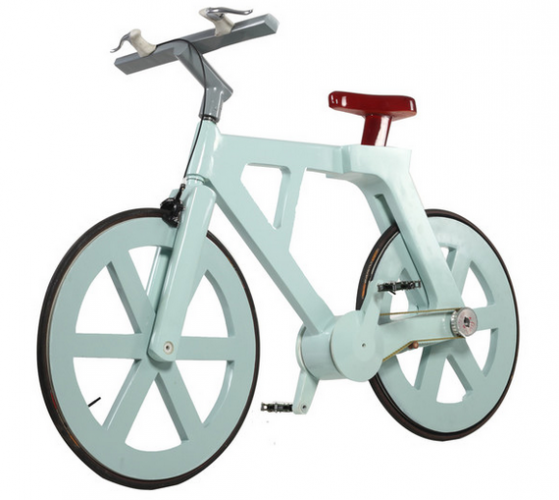 Cardboard is traditionally made of wood pulp, just as paper is, and was invented back in the 19th century to work as sturdy packaging for the shipping of valuable objects. Here in the final form – or near-final form of the bike, no metal pieces will be included in its entirety, it instead relying solely on recycled materials to go forth and cruise. The cardboard that makes this bike a possibility is created with a top-secret set of processes and combinations of treatments that make it rigid, fireproof, and waterproof.

With the “secret concoction” made of entirely organic materials set in the formed and cut cardboard, it’s coated with lacquer paint and set for final construction. Here with the final mix, the bike will cost no more than $20 to purchase on the general market. Gafni notes that the current construction process has each bike made with materials that cost no more than $9 per unit.

“This is a real game-changer. It changes … the way products are manufactured and shipped, it causes factories to be built everywhere instead of moving production to cheaper labor markets, everything that we have known in the production world can change.” – Nimrod Elmish, Gafni’s business partner

Oddly it appears that Elmish and Gafni intend on using advertising to make a profit – perhaps by having a collection of Coca-Cola bikes produced? This bit is not entirely clear at the moment.

“Because you get a lot of government grants, it brings down the production costs to zero, so the bicycles can be given away for free. We are copying a business model from the high-tech world where software is distributed free because it includes embedded advertising.” – Elmish

Here at the start of the process, three models of bicycle and a wheelchair are set to be available for purchase within a year. The partners intend on having an “urban bike” produced in six months that’s assisted by an electric motor (which would require metal), and a youth bike that’s 2/3 normal adult sized bikes. There’ll also be a “balanced” bike (with training wheels) for the youngest customers and a wheelchair for non-profit groups.

[via Rueters; via FastCo]