Acer’s Windows 8 all-in-ones cause big fuss in Taiwan, we go hands-on to find out why (video) 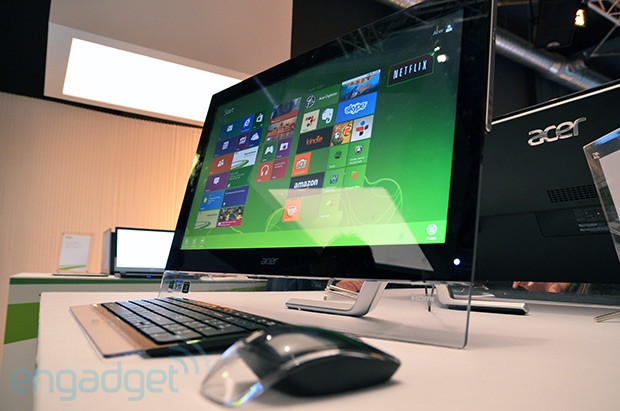 Although Microsoft’s Windows 8 launch will very likely go down in history as a positive turning point for the company, it wasn’t without it glitches. Specifically, the Wall Street Journal reported yesterday that Microsoft reps in Taipei found it difficult to navigate their own OS due to hardware issues with their demo devices — namely, new all-in-one PCs from Acer and ASUS. There were said to be issues with opening and closing apps, possibly due to the implementation of touch on such large screen sizes of 23-inches and over.

Well, we’ve just been fingers-on with both the 23-inch Acer Aspire 5600U and the 27-inch 7600U in London, and we can report that the touch interface was totally fluid. Moreover, the LCD displays maintained their natural colors very well when switching from an almost vertical 80-degree orientation to an almost-flat 30 degrees. These models come with Ultrabook innards starting with low-voltage versions of the Core i5 and the NVIDIA 630M, and they also come with HDMI-in and optional TV tuners so they can be used in a living room or kitchen situation. Pricing in Europe begins at 1,000 Euros for the 23-inch model, rising to 2,000 Euros for the full-spec 27-incher. Check out the video after the break and you’ll see that we asked our Acer rep for his view on what happened in Taiwan and, although he didn’t have first-hand knowledge of the event in question, he insisted that it was a storm in a teacup. Given our experience of the devices so far, we’re inclined to believe him.

Continue reading Acer’s Windows 8 all-in-ones cause big fuss in Taiwan, we go hands-on to find out why (video)