Acer Iconia W700 Windows 8 tablet ships this month with a cradle and keyboard included, starts at $800 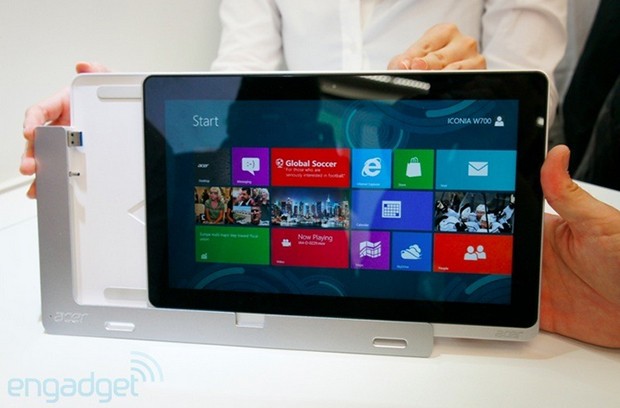 Acer was one of many companies to preview its Windows 8 devices at Computex this summer, showing off its Iconia W700 tablet along with the W510. As the release date for Microsoft’s much-anticipated OS draws near, Acer is announcing the slate once again, this time with full pricing and availability.

To jog your memory, the Iconia W700 is an 11.6-inch slate with a Core i3 or Core i5 Ivy Bridge chip under the hood. As we’ve come to expect from Iconia devices, the W700 boasts an IPS display, and this particular panel has a 1,920 x 1,080 resolution. There’s a 1-megapixel, 720p front-facing shooter, and a 5-megapixel camera capable of 1080p video capture sits on the back. The tablet comes with a cradle that sports three USB 3.0 ports and lets you dock the device in either landscape or portrait mode. A Bluetooth keyboard, which comes already already paired with the tablet, is included in the box, along with an HDMI-to-VGA dongle.

Acer says the tablet is good for up to eight hours of usage. The W700 will be available in three configuration options, all of which will go on sale October 26th. For $800, you get a Core i3 CPU, 4GB of RAM and an 64GB SSD. Stepping up to $900 gets you a Core i5 CPU and the same RAM and memory options, while the $1,000 model includes a Core i3 processor, 4GB of RAM and a 128GB SSD. Head past the break for the full PR, plus our hands-on video, in case you needed a refresher.

Acer Iconia W700 Windows 8 tablet ships this month with a cradle and keyboard included, starts at $800 originally appeared on Engadget on Thu, 04 Oct 2012 08:00:00 EDT. Please see our terms for use of feeds.