Acer Iconia W510 preview: as Acer moves into the Windows 8 era, it returns to its netbook roots 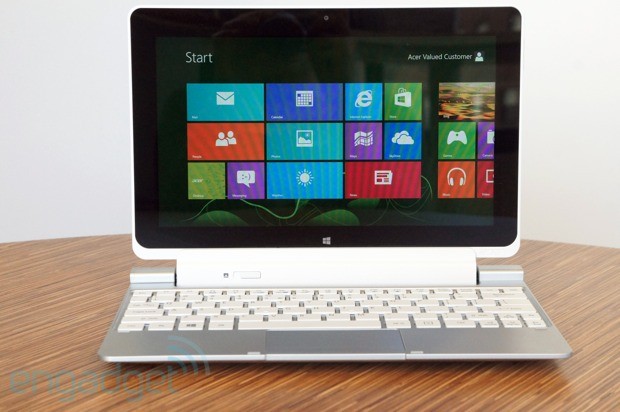 Here it is, folks: our first Windows 8 device. No, not the first we’ve laid hands on, but the first built-for-Win-8 PC that we’ve been able to take home and spend some quality time with. If you don’t remember today’s specimen, you’d be forgiven: the Acer Iconia W510 is one of many, many tablet / laptop hybrids that have debuted over the past few months. Plus, this isn’t even the highest-end Windows 8 PC Acer has to offer: unlike the W700, which has a 1080p screen and Ultrabook guts, the W510 runs off a Clover Trail-based Atom processor, and has a smaller 10.1-inch (1,366 x 768) display.

Accordingly, the price is also lower: the W510 will start at $500 for the tablet only, though you’ll also be able to purchase it with the detachable keyboard dock for $750. (And if the dock really does double the battery life to 18 hours, you might want to.) Though the W510 won’t be available for a few weeks yet — it goes on sale November 9th — we’ve gotten a hold of an early unit. An important note: the model we tested was pre-production, so we’ll hold off on benchmarking for now and update our story with performance scores and a review card once we have the chance to test a final unit. In the meantime, if you’re looking for a deeper dive on the hardware, you’ve come to the right place.

Continue reading Acer Iconia W510 preview: as Acer moves into the Windows 8 era, it returns to its netbook roots

Acer Iconia W510 preview: as Acer moves into the Windows 8 era, it returns to its netbook roots originally appeared on Engadget on Tue, 09 Oct 2012 08:00:00 EDT. Please see our terms for use of feeds.