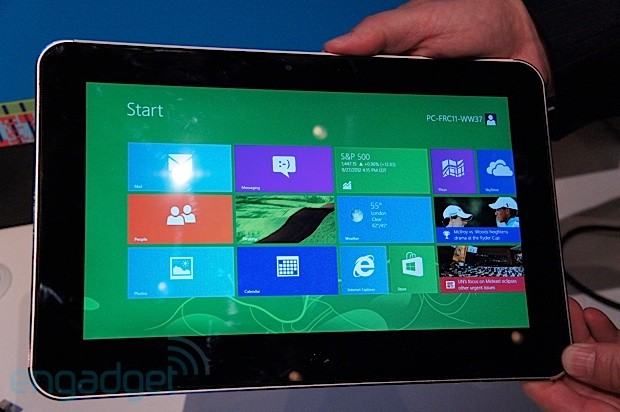 Intel just outed its new Atom SoC, and at its tablet event in San Francisco today, the company had a whole slew of slates packing the Clover Trail silicon on hand. Dell’s Latitude 10, the ASUS Tablet 810, Acer’s Iconia W510 and W700, Lenovo’s ThinkPad 2, the HP Envy x2 and Samsung’s Series 5 were all there. However, it was the handsome slice of Windows 8 from ZTE that really caught our attention. Called the V98, it has a 10.1-inch, 1366 x 768 LCD on top of an aluminum chassis with a beveled edge similar to what you’d find on a white iPhone 5. Beneath that handsome exterior is the aforementioned Intel Z2760 chipset, 64GB of ROM, 2GB of RAM and 32GB of storage (plus a microSD slot if you need more digital space). There’s 802.11 b/g/n WiFi, GPS, Bluetooth 4.0, tri-band UMTS and quad-band GSM radios, plus NFC and LTE can be had as options. It’s got an accelerometer, proximity and ambient light sensors, a magnetometer and a gyro, too. An 8-megapixel camera is stuck in the back, while a 2-megapixel shooter resides round front. ZTE managed to stuff all that and a 7,000mAh battery inside a svelte 8.9mm-thin package.

We got to spend a little bit of time with a prototype ZTE model, and found the hardware to be solid for a hand-built unit. Its aluminum chassis makes for quite a rigid device in hand, and the machined and polished bevel gives the V98 a very high-end look. The chromed plastic volume rocker, power button and screen orientation lock switch nestled in the plastic radio reception strip at the top of the device are decidedly less luxurious, however — the travel of each was shallow, and the finish on the plastic appeared a bit cheap to our eyes. That said, the rotating magnetic aluminum door that reveals the SD card and SIM slots is slick — far easier to open and close than the plastic port covers found on most other slates. There’s also a 30-pin docking port on the bottom edge of the tablet, but ZTE informed us it’d be another month or so before the dock is ready for public consumption. Unfortunately, the V98 won’t be available for purchase until Q1 of next year, but you can see if its worth waiting for in our gallery of shots below.