HomeNewsZeebox second screen TV companion app crosses over to the US, with...
News

Zeebox second screen TV companion app crosses over to the US, with a boost from Comcast and HBO 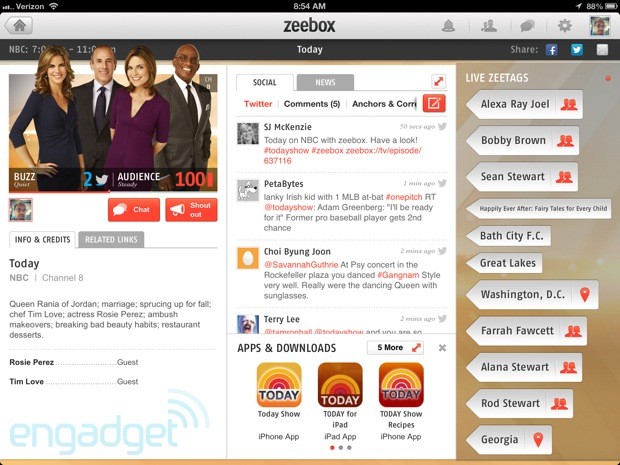 While it seems like every network is rolling out its own personal second screen app for tablets and / or phones, over in the UK zeebox has been trying to corner the experience across channels and providers with its app. Available as an app for iOS and Android and also on the web, it brings a customized TV guide, live chat, social network sharing and remote control features to the TV experience, and now it’s come to the US. Other than the typical second screen experience, its main hook is an “OpenBox” API and tags that allow content providers to customize the experience for their viewers… and then sell them stuff like video on-demand or related merchandise.

On this side of the Atlantic zeebox has secured backing from Comcast / NBC Universal, giving it financial and promotional support as well as covering more than 30 networks right away. It also means it can eventually act as a remote control for Comcast users, which may be an advantage over competition like Miso, GetGlue and IntoNow, and can flex its muscles paired with hundreds of shows like The Voice, Notre Dame football and HBO content like True Blood. Out of the box, the app’s social ties and careful metering may be a programmer’s dream as it monitors who is watching what live, but we’ll have to see more of the second screen content come to life if it’s going to catch on socially. A customizable guide (yes, you can hide or reorder channels at will) is a nice touch and so is being able to see what your friends are viewing with Facebook Open Graph and Twitter hooks — but only if they’re actually using it. If you want to check it out, the free apps are linked below and the full press release follows after the break.

Continue reading Zeebox second screen TV companion app crosses over to the US, with a boost from Comcast and HBO

Zeebox second screen TV companion app crosses over to the US, with a boost from Comcast and HBO originally appeared on Engadget on Thu, 27 Sep 2012 10:46:00 EDT. Please see our terms for use of feeds.