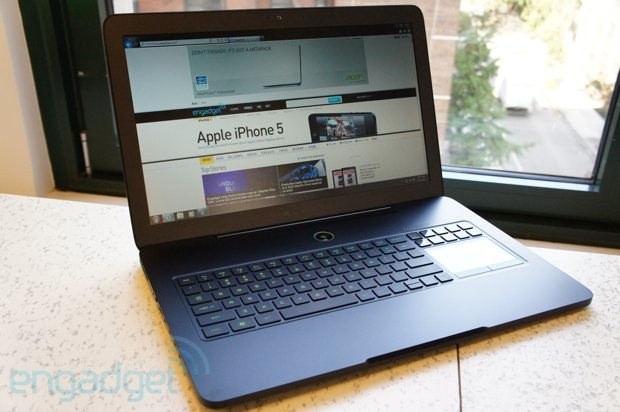 Razer’s second attempt at a gaming laptop is just as sleek as its first try, and even more powerful. The second-generation Razer Blade — Razer Blade 2.0, we’re calling it — packs some serious hardware: an unannounced Core i7 processor, NVIDIA GeForce GTX 660M graphics (a big step up from last year’s GT 555M inclusion), 8GB of 1600MHz DDR3 RAM, a 500GB 7200RPM hard drive, and 64GB of solid state storage. All that hardware is stuffed in a nigh identical aluminum chassis to the first edition, with a 17.3-inch high def screen and the infamous multitouch LCD Switchblade interface (read: that bizarre little touch screen built into the keyboard). And all this for the low, low price of … nearly $2,500. Yikes.

For the savvy, independently wealthy gamer on the go, however, little else on the market compares to Razer’s Blade laptop. The second generation focuses on beefing up the tech specs from last year, and that’s immediately apparent with the inclusion of the Kepler-grade GTX 660M. Not much else is changed in the hardware department otherwise, with the exception of the USB slots all being upgraded to 3.0 — the same LCD touch panel display sits on the right side of the keyboard, and its been bolstered with a new software suite.