HomeNewsNissan Terra concept takes you and your fuel cell off the beaten...
News 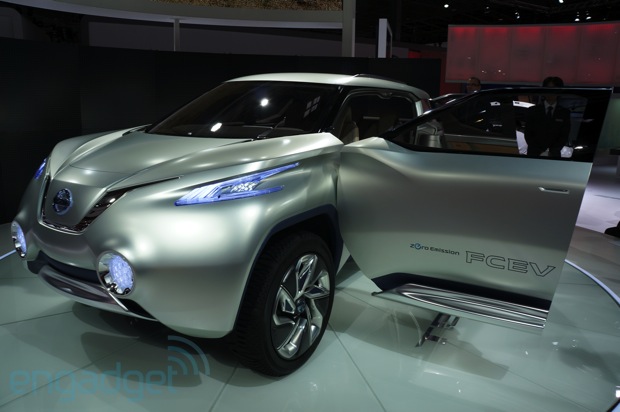 Your average fuel cell powered car is something like the Mercedes B Class F-Cell: tiny, light and hugely efficient. Nissan is trying to break that rather restrictive preconception with its latest concept, the Terra. Like its cross-prefixed predecessor, the Xterra, and similarly quirky Juke, the Terra is designed to take the rougher road while cosseting its occupants in a particularly trick interior featuring both a dashboard that’s actually a removable tablet. The idea is you can take it inside and keep tabs on your car, but we wonder what happens when you leave it sitting by the bed as you groggily stagger out to your vehicle in the morning.

Impractical concept car interior design decisions aside, the machine is powered by a trio of electric motors (yes, three) driving all four wheels and receiving their power from Nissan’s latest hydrogen-powered fuel cell. Nissan says this unit costs just one sixth that of its predecessor, but presumably such a system has a long way to go before it can be placed in a reasonably priced machine. No word on what this might cost — if indeed it ever goes into production. This one, we think, isn’t too likely.

Nissan Terra concept takes you and your fuel cell off the beaten path originally appeared on Engadget on Thu, 27 Sep 2012 09:23:00 EDT. Please see our terms for use of feeds.