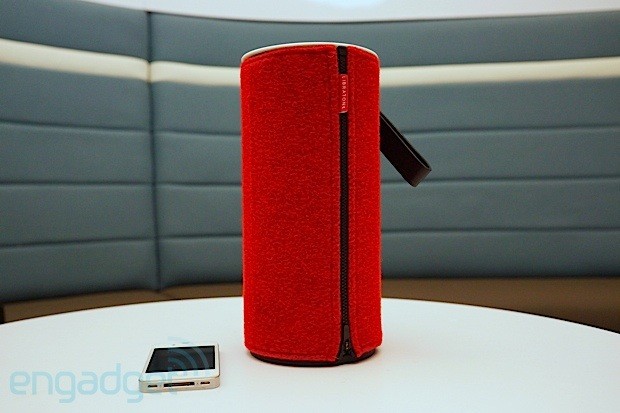 If you’ve been following the surge of AirPlay speakers that started hitting the market in 2011, you’ve likely feasted your eyes on the spendy wool-clad systems by Libratone. While its larger Live and Lounge units have primarily been purposed for households, its new Zipp speaker is the being touted as the “first and only” portable AirPlay speaker. Make no mistake, unlike B&O Play’s portable AirPlay-equipped Beolit 12 ($800), the Zipp’s loaded with Libratone’s proprietary PlayDirect protocol, meaning it doesn’t require a separate wireless network / router for iDevices to connect to it over the air. The Zipp moniker is a play on the swappable wool grill which cozies around its vertically-standing tubular enclosures. Weighing four pounds and measuring in at 10.2 inches high by 4.8 inches in diameter, this “portable” unit is a good bit larger than the Blutooth-equipped Jawbone Big Jambox placed sideways, but it’ll certainly fit in a backpack — hey, it does have a leather carrying strap. Thankfully, that weight is partially due to its internal rechargeable battery, which should last up to eight hours.

As far as the speakers go, you’ll find a duo of 1-inch ribbon tweeters facing the sides for the left and right channels, along with a 4-inch up-firing woofer. The rig also features Libratone’s signature FullRoom design, which forces a 360-degree dispersion of the sound by way of deflectors in front of the tweeters. Beyond that, it’ll naturally work with Libratone’s existing iPhone app, allowing you to change the DSP on the fly for optimal output regardless of its placement in a room. The Zipp will hit Apple Stores later this October wrapped with a single red or grey zippered grill for $399, while other retailers will carry the $449 Classic Color and Funky Color editions, which each come with a trio of those wool grills (black, blue and red for the Classic, and black, pink and yellow for the Funky). Past that, a single grill by itself will cost you a relatively expensive $49 directly from Libratone. In the meantime, join us past the break for more details about the unit itself and PlayDirect, our initial impressions and a hands-on video overview.