From the lab: Lumia 920 image stabilization and 808 drop test at Nokia R&D (video) 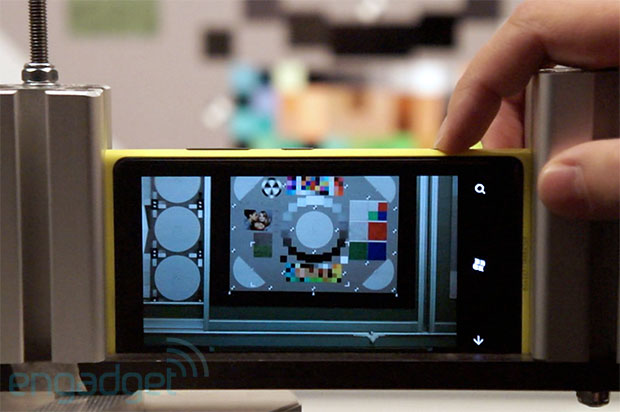 Yesterday’s lab installment gave us an opportunity to pit the Lumia 920 against competing smartphones in a low-light capture scenario, but Nokia’s standard battery of tests is used to evaluate and improve far more than stills shooting. Several stops throughout the day brought us to a foam-filled sound chamber tasked with analyzing call quality in a variety of environments, a room with industrial freezers and ovens used to push the limits of operability, and a rig that can shoot with interchangeable sensors and apply image quality algorithms in real-time, without a handset in sight. Unfortunately, due to proprietary technologies and processes, we weren’t permitted to photograph these first facilities, though we did manage to snap away at two other stations — a platform that shifted up and down at adjustable speeds to test the Lumia 920’s optical image stabilization, and a machine that drops smartphones against a block of concrete, used to simulate that all-too-frequent occurrence of handsets plunging towards pavement.

We’ve seen plenty examples of the 920’s OIS capabilities this week, so we won’t go into much more detail on that front, but specialized (and pricey) equipment enables engineers to introduce consistent processes — this machine simulated hand shake at different speeds, and even with exaggerated movement, the benefits were clear. A separate building contained the drop test contraption, which releases devices from an adjustable height, letting them land directly on a block of polished concrete. We tested both the 808 PureView and a Samsung Galaxy S III in this manner (with roughly 100 Lumia prototypes currently available, Nokia wasn’t quite willing to risk sending one to its death). Both smartphones remained in perfect working order following the drop, so it’s likely that they’ll be able to handle a similar fall during regular use as well (company reps offered to test our iPhone 5, but we declined handing it over). That wraps up our week at Nokia’s facilities in Finland — there will be plenty more to explore once we have a Lumia sample in hand, but you’ll find the OIS test and concrete plunge videos ready right now, posted just after the break.