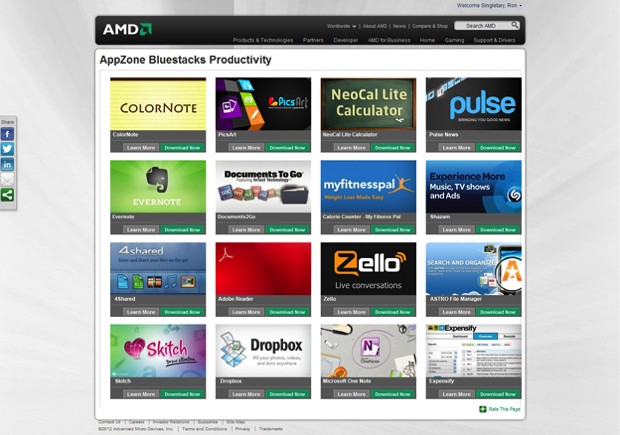 AMD has a disproportionately large $6.4 million investment in BlueStacks, and now we’re seeing one clear reason why. The two companies have teamed up to create a special version of the BlueStacks App Player that’s tuned for AMD’s Fusion-based processors and Radeon graphics cards, running Android apps with the full help of the chip desgner’s hardware in Windows 7 and 8 PCs. Accordingly, over 500,000 Android apps are invading AMD’s new AppZone portal without any needed tweaks of their own, giving the service a much larger catalog than if it had gone with Windows alone. Both companies have a clear incentive to this melding of desktop and mobile: BlueStacks suddenly gets exposure to as many as 100 million AMD-running users, while AMD can tout a giant app catalog that may be preloaded on future PCs using its components. We don’t know if the world needs yet another avenue for playing Angry Birds, especially when many AMD-based PCs won’t have touchscreens, but the BlueStacks partnership could be a strong lure for new PC buyers who’d like an instant software library.

BlueStacks teams with AMD to optimize Android App Player for Fusion, Radeon chips (video) originally appeared on Engadget on Thu, 27 Sep 2012 14:31:00 EDT. Please see our terms for use of feeds.