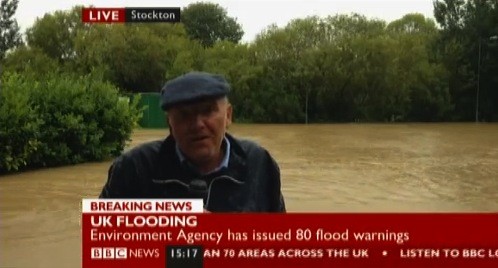 We usually associate smartphones in news reporting with citizen journalism, not full-time journalists. However, a confluence of events has just led to the BBC’s Nick Garnett becoming a pioneer for mobile broadcasting on the professional level. When a shortage of satellite trucks prevented Garnett from getting the usual video feed for the BBC News Channel, he successfully arranged the British network’s first live video interview piped through a smartphone. The key, Garnett says, was Dejero’s Live+ iPhone app: while live streaming apps are already commonplace, Dejero’s let him merge the 3G and WiFi connections together, getting enough bandwidth to make a TV-worthy broadcast in a country where LTE is still very new. Combined with some very ad hoc staging and help from the BBC’s technical teams, the coordination resulted in a surprisingly smooth interview about flooding in northeastern England with relatively few hints of the extra-tiny recording equipment involved. It’s unlikely that broadcast crews will reach to their pockets for live coverage solutions before anything else, but the BBC is actively testing Dejero and other apps that could make smartphones as much a part of the field reporting arsenal as a camcorder and an eye for a good story. As we can’t embed the clip, check the source link to see it for yourself.

Update: We’ve now managed to embed the clip after the break.