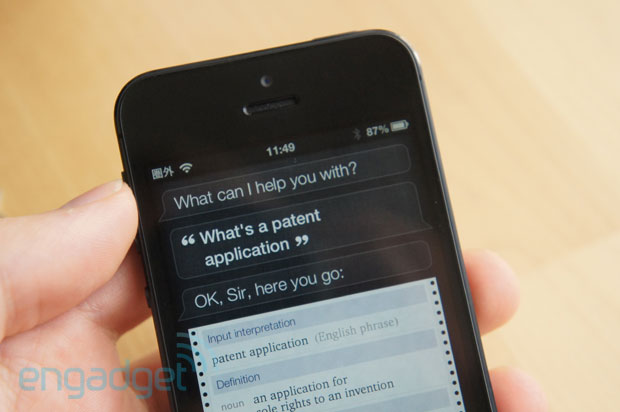 Siri’s managed to make it into several Apple devices now, so it doesn’t shock us to spy the company’s attempt to patent the polite (somewhat frosty) tones of its voice navigation system. A pretty deep patent application filed today describes an “intelligent Automated Assistant,” with the claims describing an application that is guided through the user’s speech — and all wrapped in a “conversational interface.” So far, so Siri. The filing elaborates on Apple’s earlier filings, explaining how this digital assistant furthers the users’ demands with additional requests for speech-based information — hopefully resulting in that map location or a movie booking you were after.

This “user intent” is then put to use, launching an additional app or performing the specified function, while non-speech input (presumably like the ability to correct your requests in text form) get a brief mention. We do get plenty of description on commands though, with some pretty thorough response tables and examples of “anchor text” — something that the automated assistant tries to pluck from your ramblings in order to make sense of them. The full version resides at the source below, if you’re looking for 51 verbose pages explaining Siri’s inner workings.